Crescent City is located on U.S. highway 101 on the far northwestern California coast.
Lodging: Many good hotels/motels are available in Crescent City. I've stayed at the Lighthouse Inn a couple of times, and enjoyed it very much.
Vehicles: The highways in this area are good, but are very winding, so use caution with RV's or motion-sick passengers.
Seasons: This is the wettest part of California, especially in December through January, and low clouds and fog are common much of the year. But as you'll see in my pictures, the weather can make your views and photos more interesting. 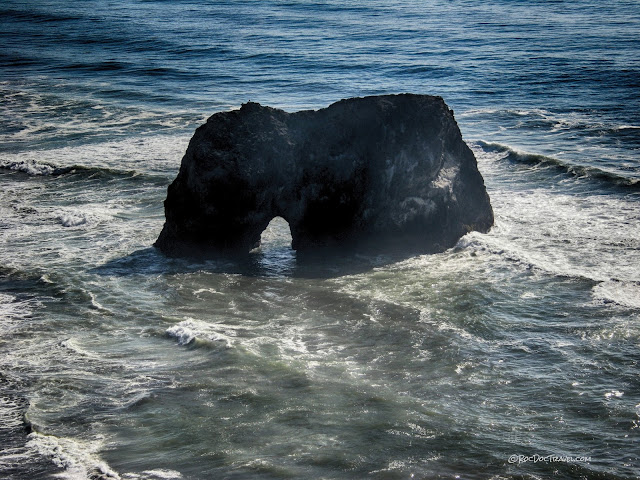 Sea arches form along fractures or soft rocks where the waves are able to cut through a sea stack. Most of the stacks along the northern coast are altered basalt, blueschist, or graywacke. This one is near Westhaven. 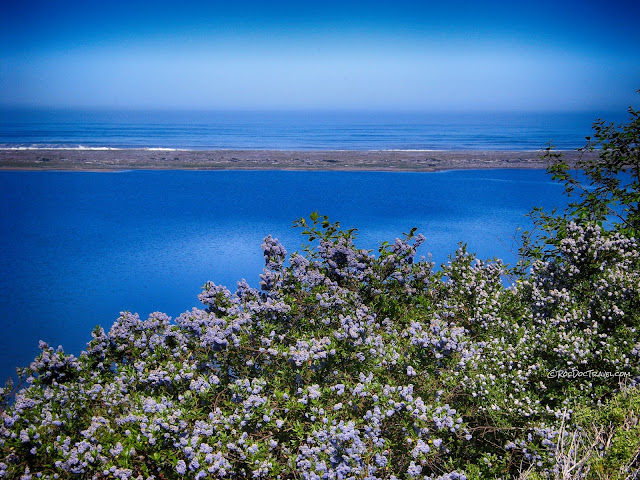 If you're coming to Crescent City from the south, you'll pass by the big Humboldt Bay lagoon at Eureka. Wave action has smeared sand along the coast day by day, storm by storm, until the sand has cut off this large bay to form a lagoon. 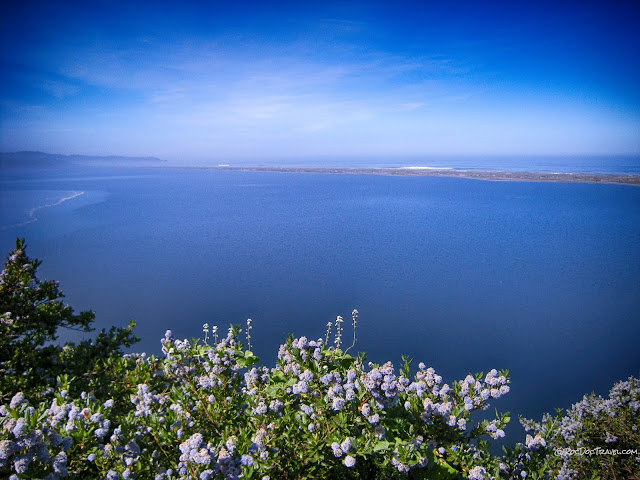 The Humboldt Bay lagoon at Eureka is about 11 miles long and about 4 miles at its widest. You'll drive by several smaller lagoons between Eureka and Crescent City. 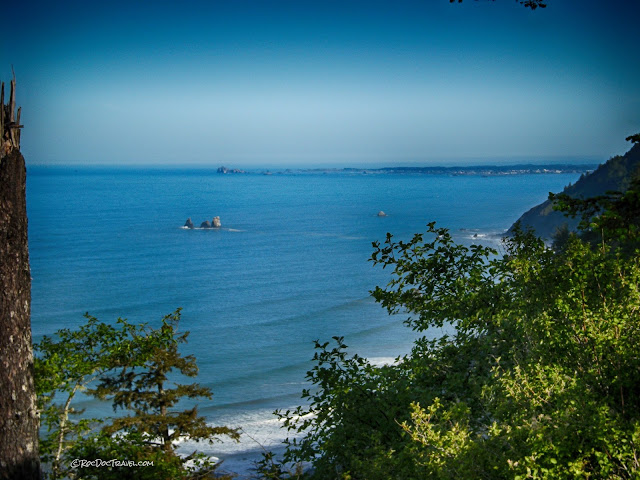 Take you time along this stretch of the coast, take all the turn-outs, and soak in the scenery! 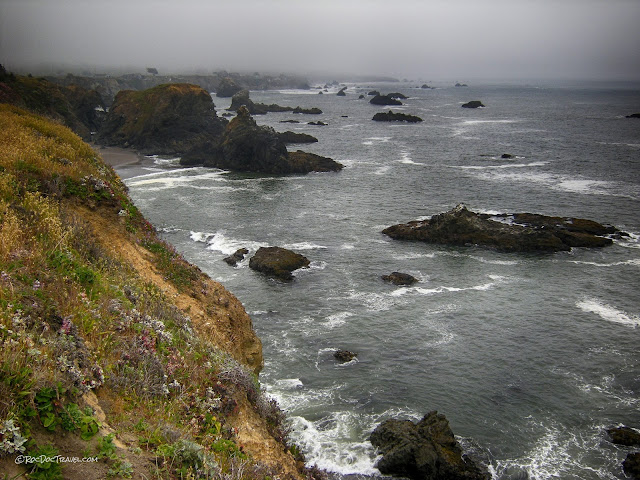 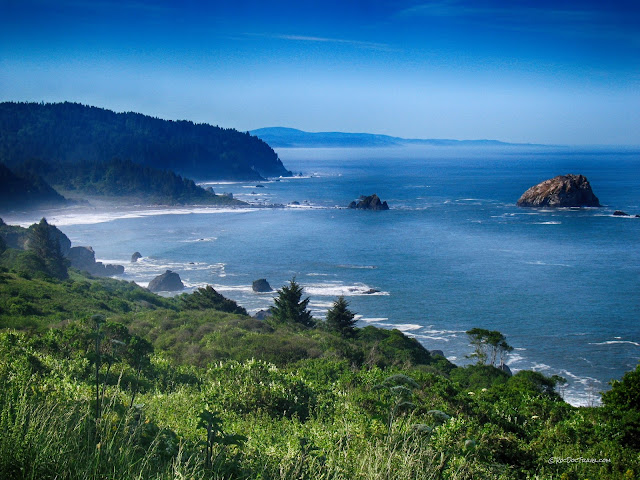 This postcard view is just south of Crescent City. 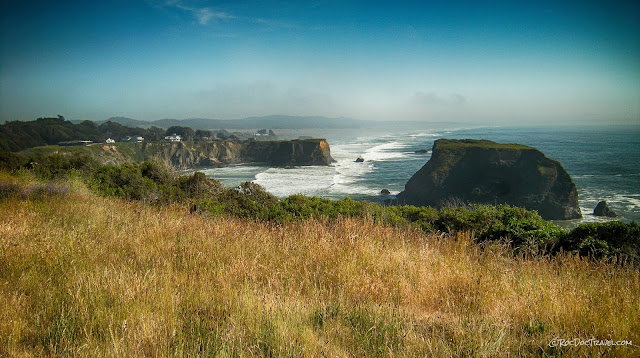 One of the geologic hallmarks of the northern California coast is its history of tectonic uplift. All along the coast, you'll see flat benches uplifted 30-60 feet above the beach. These are uplifted marine terraces that were planed flat by wave action, then uplifted by a series of earthquakes. 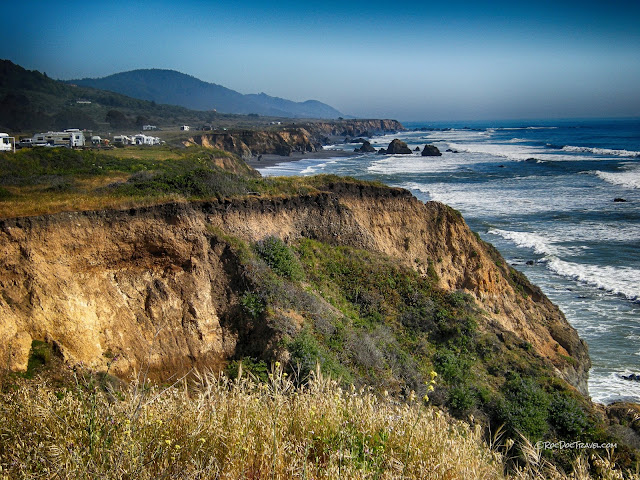 This particular uplifted marine terrace is farther south at Westport. 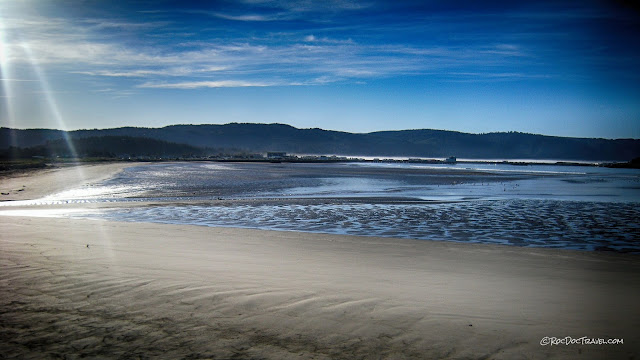 Crescent Harbor is shallow and broad. At low tide, much sand is exposed around the edges. Its shallow slope makes it particularly vulnerable to tsunami, which have caused damage to the harbor many times in the past. 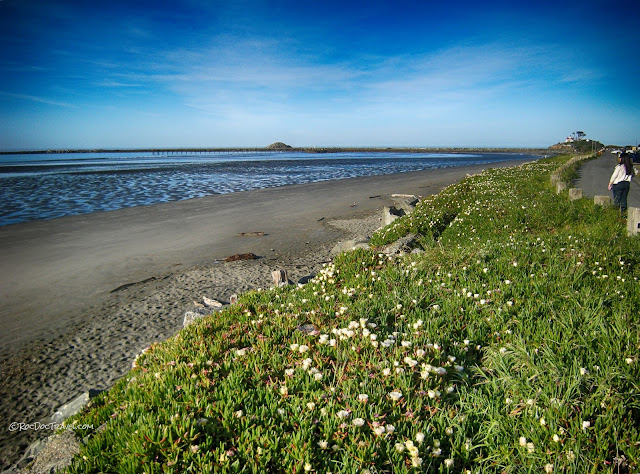 Here's another look at the harbor at low tide, this time toward the ocean and the big jetty. 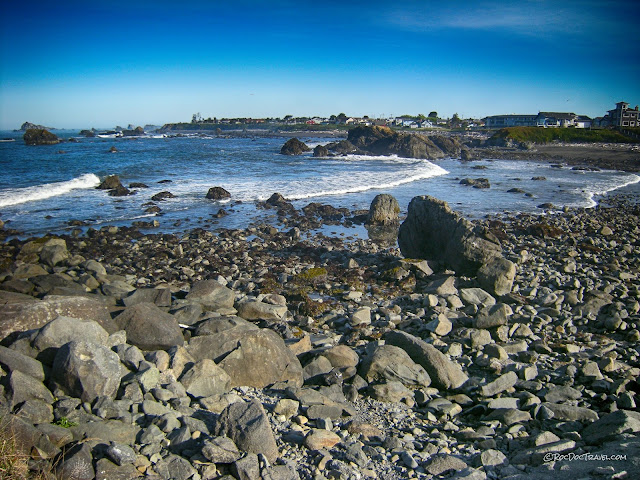 The gray boulders and most of the sea stacks are made of graywacke, the gray sandstone that forms between the subduction zone and inland volcanoes. The volcanoes in this case are long gone, but you can imagine when the geography here was much like Chile today. 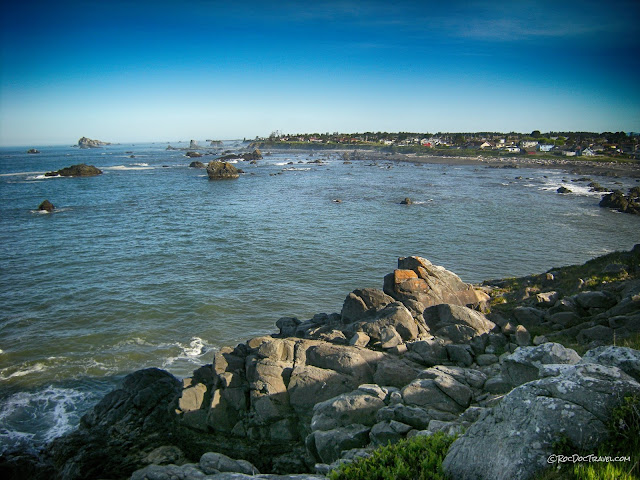 Sea stacks take a relentless pounding from waves. To survive at all, they have to be made of quite hard, erosion-resistant rock. Any weaker rock will be quickly eaten away. 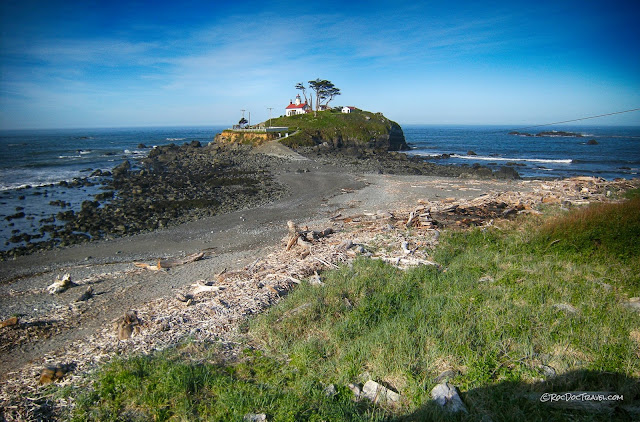 Be sure to visit the Battery Point lighthouse! It has been there since the 1850's, and is open for tours. Visit the Del Norte County History website for more information. 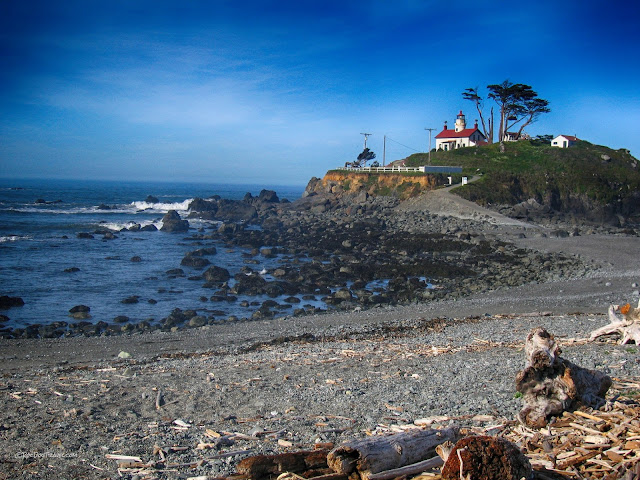 The lighthouse is only accessible at low tide, so plan accordingly! 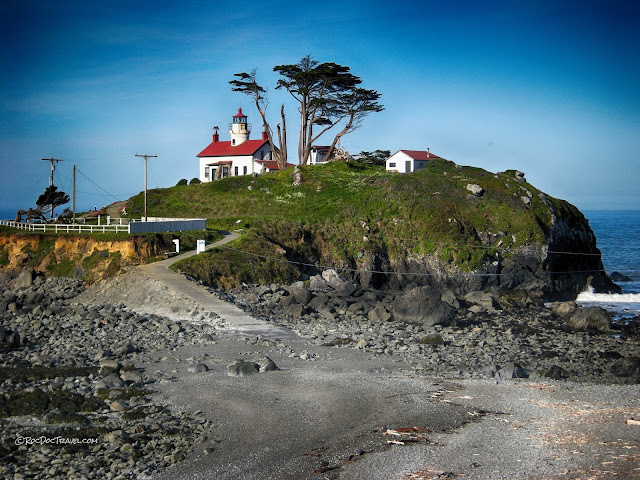 The lighthouse is built on a large intact piece of graywacke that has withstood millennia of battering from waves, including overwhelming tsunami waves from the M9.2 Alaskan Good Friday earthquake in April 1964. 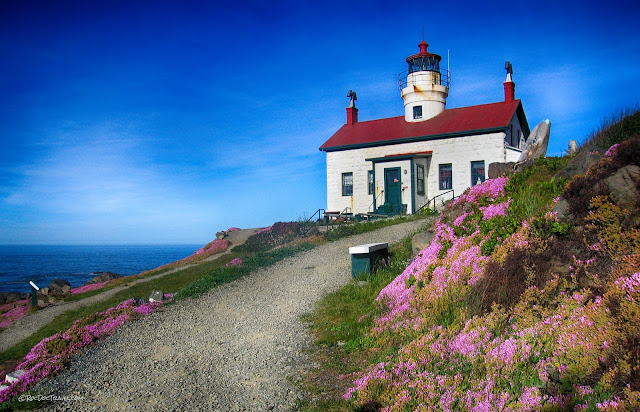 The lighthouse is also a residence. See the website for information on tours.


Josephine Ophiolite on the Smith River

Ophiolite is oceanic lithosphere (crust + upper mantle) formed at mid-oceanic ridges. In this diagram, the boundary between gabbro (crust) and ultramafic rocks (mantle) is the "Moho." I haven't found a place to see the Moho along the Smith River, but I haven't given up trying! This trip will start at the mantle and work upwards.  (USGS diagram)

This Google field trip will help you find the places described below:  Click here. 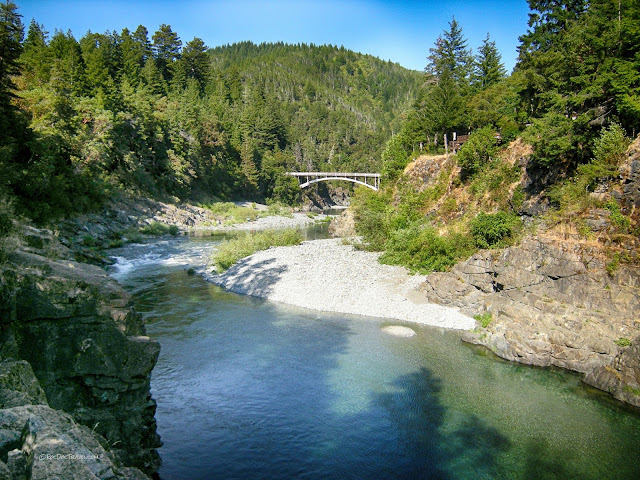 Ever wonder how we know what's in the mantle, when no one has yet been able to drill down to it? See for yourself along the Smith River! The first stop is at the confluence of the main and south forks of the Smith River near Hiouchi (see map below). The rock here is harzburgite, typical of the upper oceanic mantle. It's a dense rock made of olivine (iron-magnesium silicate) and pyroxene.


Interactive Google Map to the mantle outcrops near Hiouchi. 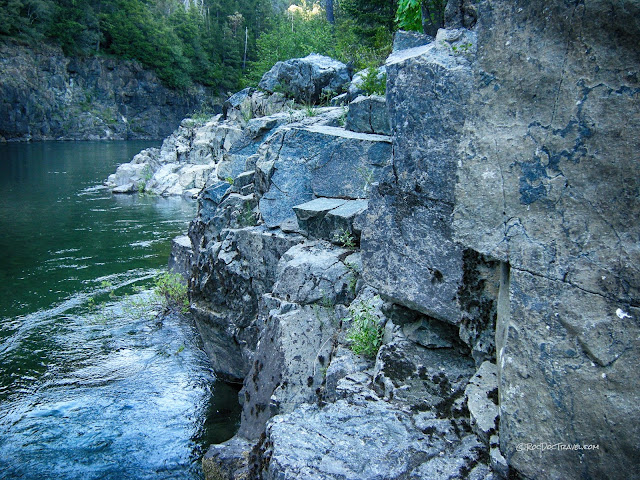 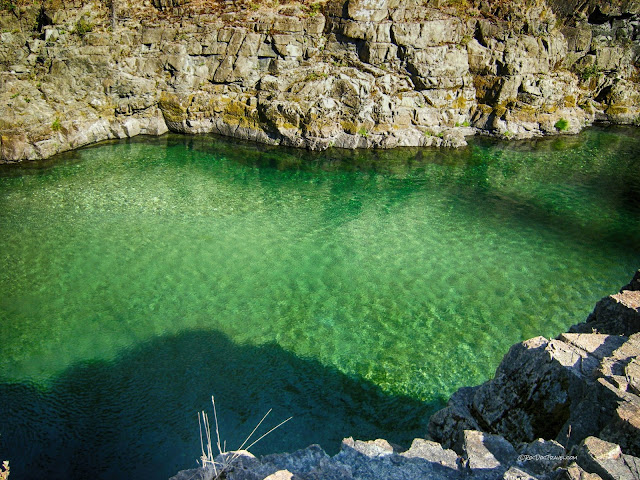 The harzburgite also forms a fantastic swimming hole! Because the ophiolite through which the Smith River flows has almost no clay, the water is extremely clear. 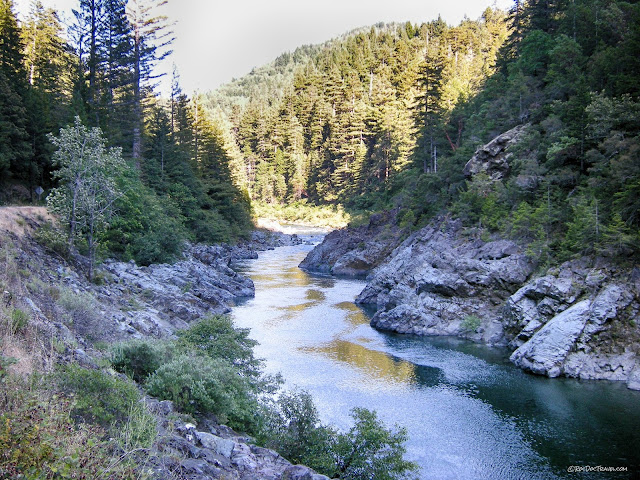 Farther up the river is a thick section of lower crustal gabbro. Like the other northern Coast Ranges and Trinity Mountains rivers, the Smith is subject to extreme flooding. In this photo, you can see the seasonal high water mark below the established tree line. In the Great Flood of December 1964, this highway was destroyed. 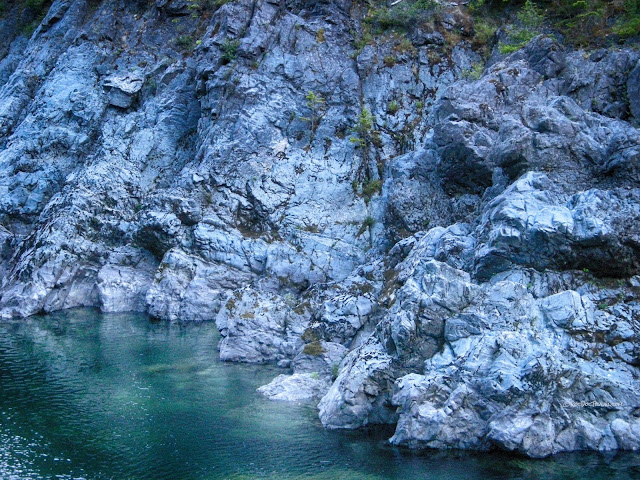 Gabbro makes up the lower oceanic crust. It's chemically and mineralogically the same as basalt, the ocean-floor lava. Its density is about 3000 kg per cubic meter, and so is about 11% heavier than granite by volume. In places you'll see that it is layered. The river weathers it to bluish-gray. 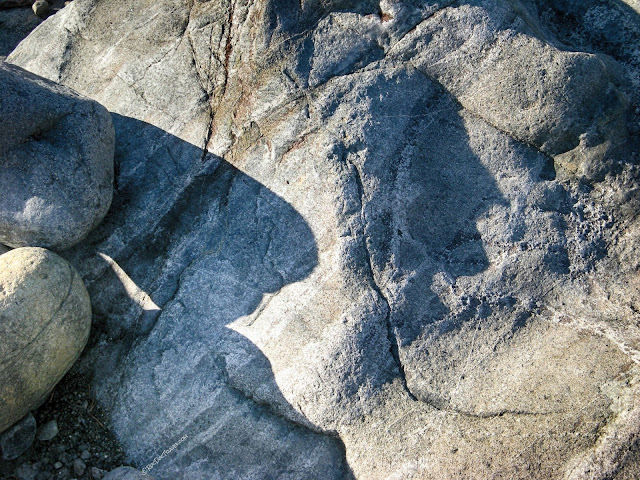 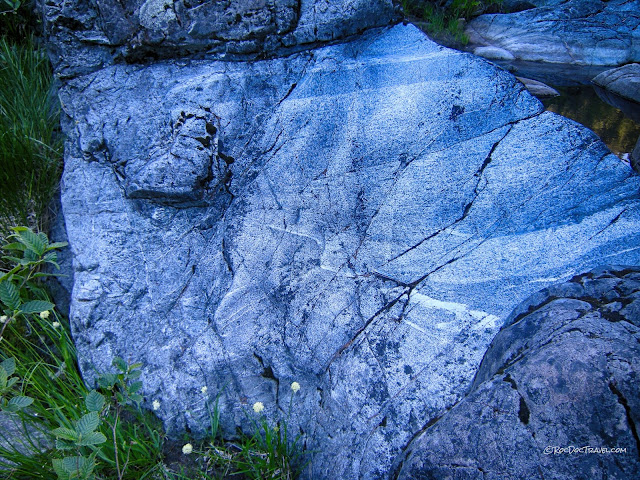 The layering here was formed by cooling against the cooler edges of the magma chamber. 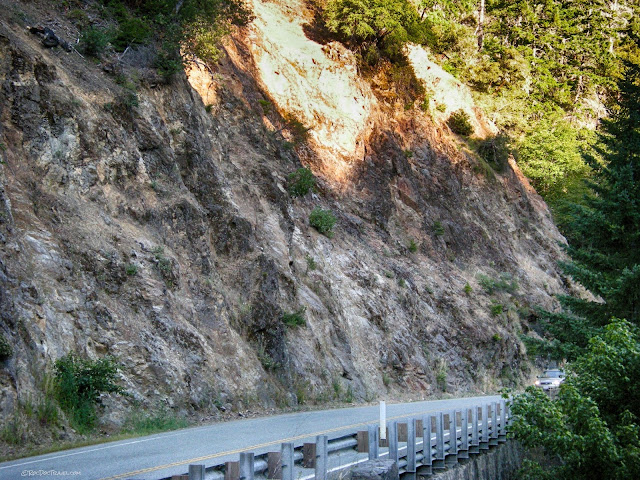 Still higher in the ophiolite are the sheeted dikes. They were feeders to erupting lava flows on the seafloor above. Each dike filled a fracture, then later when the plate shifted a bit and created a new fracture, new magma filled it. By this repeated process, the dikes end up side-by-side, or "sheeted." 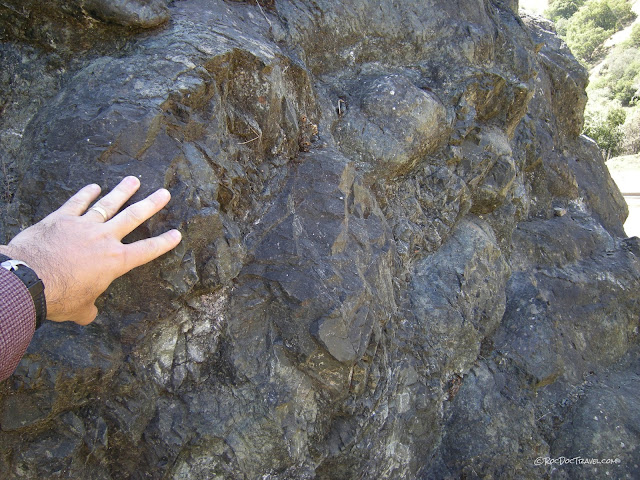 The ancient seafloor is made of basaltic "pillow" lava like this from elsewhere in the melange. The pillows form as lava cools quickly in the cold seawater, causing the lava to roll over on itself like toothpaste being squeezed from the tube. 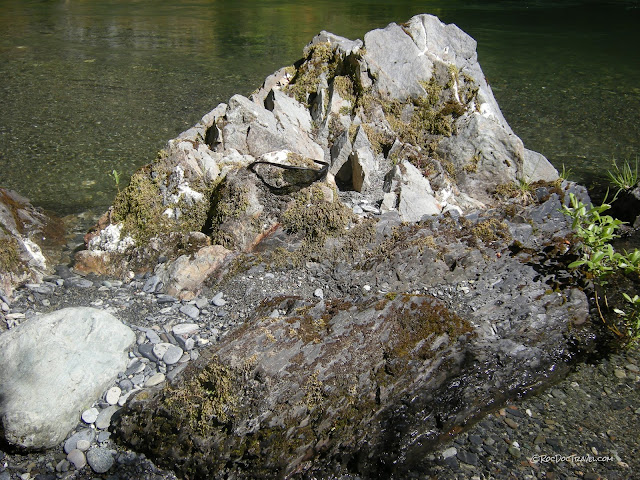 This limestone and chert is the top of the ophiolite - the ancient seafloor.

There you have it -- you've been through the entire oceanic lithosphere!

Related Websites:
Field trip from U. of Oregon
You can also search on "josephine field trip" to find more. 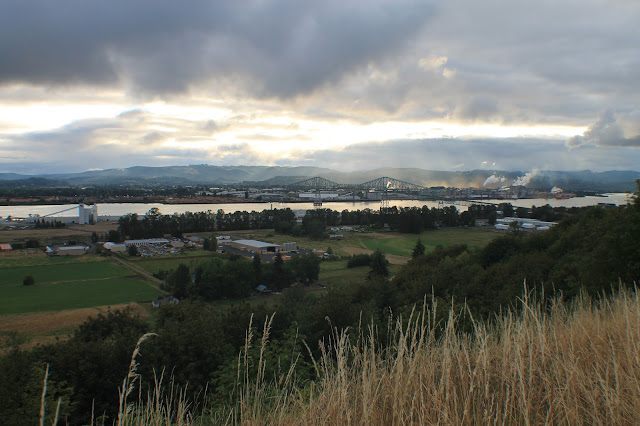 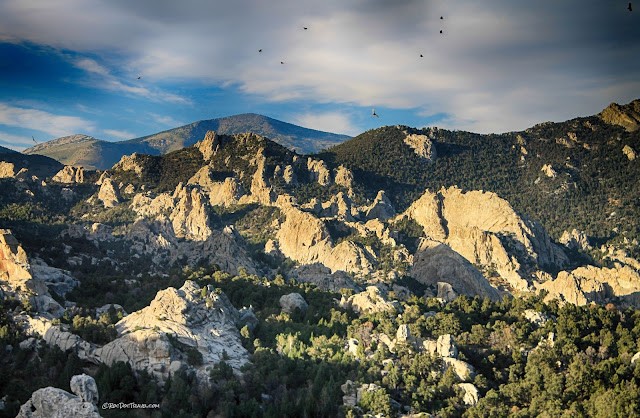 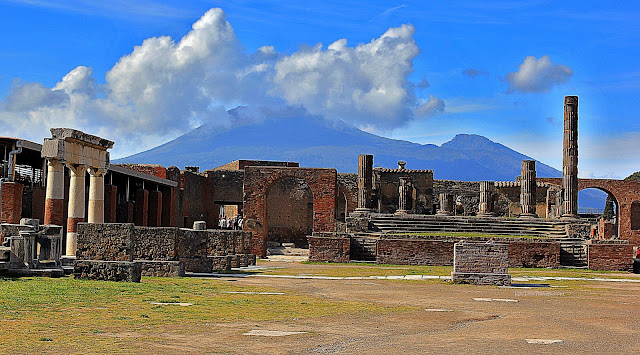